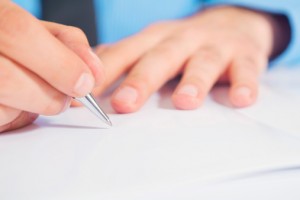 Forgery is defined as knowingly faking someone else’s signature or handwriting for the purposes of committing a fraud. Falsifying documents related to money or property in order to commit fraud can also be considered forgery. Common examples of forgery include adding fake pages to a will, forging a signature on a stolen check, and writing fake medical prescriptions. It is important to note that intent to defraud is a very important element in any forgery case. Faking a signature is not a forgery unless there is a fraudulent intent behind the act. That’s why it is not forgery to fake your friend’s signature on a credit card receipt if they have given you permission to do so, but the same act would be a forgery if you were using a stolen credit card. A southern California forgery defense lawyer can help you understand the nuances at work in your case and defend you against forgery charges.

Consequences of a Forgery Conviction

The first step a criminal defense lawyer will often take in a forgery case is to try to find handwriting experts and other witnesses who can testify that you did not actually create the forged documents or signatures in question. If you did in fact create the documents, your forgery defense attorney can still help by trying to prove that you did not intend to use the documents in a fraudulent manner. This is often a very successful strategy, because if intent to defraud cannot be proven, faking a document cannot possibly be a forgery. It is not illegal to fake a signature or document for your own amusement, as satire, or for any other reason that does not include the intent to pass the result off as genuine in order to deprive someone of money, property, or a legal right.

Forgery falls under the umbrella of white collar crime and is often associated with workplace crime. As a southern California criminal defense attorney with special expertise in business law, Torrence L Howell can bring a great deal of knowledge and experience to your defense.