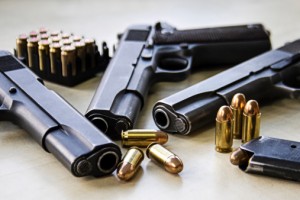 California has many laws governing the legal and illegal possession and use of guns and weapons, many of which are confusing and full of technicalities. There are laws detailing what kinds of guns, knives, Tasers, and other weapons are legal to possess, and other laws regarding how, where, and by whom these legal guns & weapons may be carried. For example, a convicted felon may not possess or carry a firearm, individuals without concealed carry permits may not transport their handguns unless they are inside a locked container, and no unauthorized person can bring a gun within 1,000 feet of a school. Violation of rules such as these will result in guns & weapons charges, as will the use of a gun or weapon in the commission of a crime such as an assault or a drive-by shooting. If you’ve been charged with any kind of gun or weapon crime, you need to retain the services of a southern California guns & weapons defense lawyer.

Consequences of a Guns & Weapons Conviction

There are lots of different guns & weapons charges, ranging from selling a gun without a license, possessing an illegal firearm, and carrying a legal firearm illegally to discharging a weapon from a vehicle. Depending on the nature of the crime, the type of weapon, and your criminal history, a judge may assign different penalties for a guns & weapons conviction. If you used a gun in conjunction with another felony such as murder, it may result in sentencing enhancements under California’s “use a gun and you’re done” law. This law allows judges to sentence offenders to 10 years in prison for using a gun, 20 for firing it, and 25 to life for the serious harm committed with the gun (ie the murder or other felony).

Because there is such a variety of guns & weapons charges, defending against them can be simple or difficult for a criminal defense lawyer. For example, illegal possession charges can often be cleared up by proving that the defendant actually did have the right to possess that weapon. Other possibilities include arguing that the weapon did not belong to the defendant and was placed in their possession without their knowledge. One final tactic is for a guns & weapons defense attorney to get the weapon itself thrown out of evidence on the grounds that the police made a mistake and violated the defendant’s rights when seizing or discovering the gun.

Guns & weapons charges are full of technicalities, but that is not at all daunting for southern California criminal defense attorney Torrence L Howell. He understands the law and is willing to research all the minutiae of your case in great detail in order to craft the best possible defense.